Jump starting 2013 with a Blog Hop

My friend and fellow writer, Beth MacKinney , invited me to participate in this writer’s blog hop — two weeks ago. And I said yes.  January 12 seemed so far away, until today when I realized that this was the 12th!

I am happy to provide the following responses to the questions about my current project.

What is the working title of your book?
The working title of my book is KINGDOM SEASON: SPRING.
Where did the idea come from for the book?
My book idea began as an outgrowth of a fairy tale called THE KING’S THREE DAUGHTERS. Originally, I wrote it as a short story for one of my nieces a few years ago at Christmas time. I enjoyed the genre so much, that I expanded it to a novel and began to envision a prequel.
What genre does your book fall under?
Young Adult Romantic Fantasy Adventure
Which actors would you choose to play your characters in a movie rendition?
This is a really fun question as I also write screenplays and direct plays!
Here goes: Amadeo – Anton Yelchin; Aquilina – Brie Larson; Sophie – Selena Gomez; Peridona – Jessica Chastain; Renato – Richard Armitage; Boreas – Gustaf Skarsgard; Queen Eera Aegna – Deborah Winger; The Emperor – Alec Baldwin; Rex Regis – James Nesbitt
What is the one-sentence synopsis of your book?
After an enemy’s vicious sneak attack on the castle, Rex Regis  sends his daughter, Aquilina, and her twin brother, Amadeo, on a quest for help from an ancient empire at the other end of the world.
Will your book be self-published or represented by an agency?
Hopefully, by an agency
How long did it take you to write the first draft of your manuscript?
30 days, thanks to NANOWRIMO! But the first re-write has taken a year and two months.
What other books would you compare this story to within your genre?
It’s a young woman’s LORD OF THE RINGS or A GAME OF THRONES story.
Who or What inspired you to write this book?
Faerie tales! JRR Tolkien, the Grimm Brothers, Hans Christian Anderson, CS Lewis, Tales of the Arabian Nights
What else about your book might pique the reader’s interest?
The model for my “Empire of the East” is inspired by research into the world of the Byzantine Empire. This world  has been absolutely fascinating to me – especially with its connections to Sardinia, Norway, Sweden, Russia and the Middle East. I am also fascinated by castles and archeology so that has been a very enjoyable part my journey with Aquilina and company.
Please visit Beth’s blog at:
http://thelastdraftwritersgroup.blogspot.com/2013/01/a-work-in-progress.html 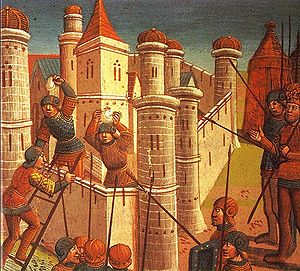